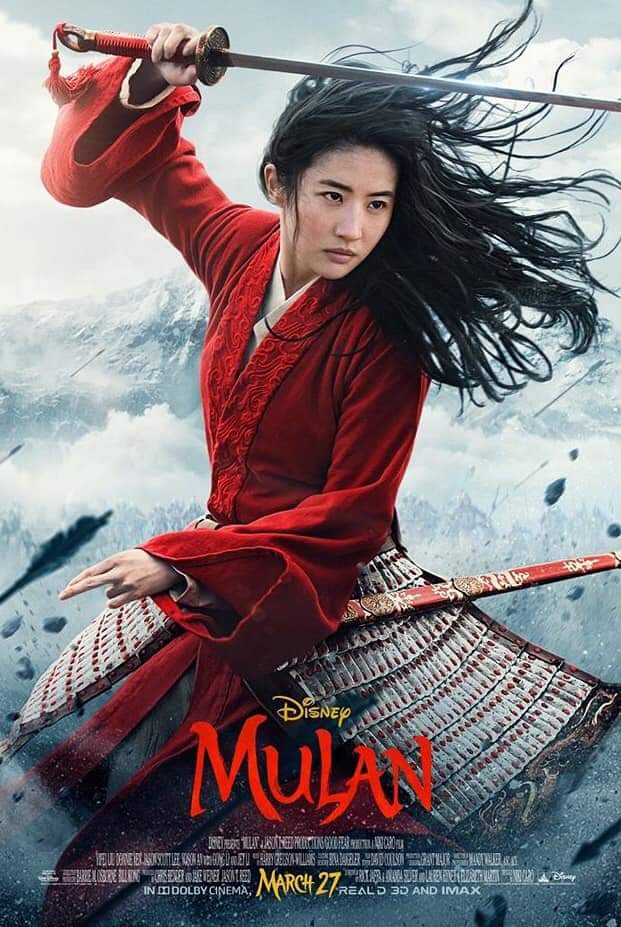 UPDATE: Have a look at the latest Poster for Mulan along with the full Trailer below!

Synopsis: Acclaimed filmmaker Niki Caro brings the epic tale of China’s legendary warrior to life in Disney’s “Mulan,” in which a fearless young woman risks everything out of love for her family and her country to become one of the greatest warriors China has ever known. When the Emperor of China issues a decree that one man per family must serve in the Imperial Army to defend the country from Northern invaders, Hua Mulan, the eldest daughter of an honored warrior, steps in to take the place of her ailing father. Masquerading as a man, Hua Jun, she is tested every step of the way and must harness her inner-strength and embrace her true potential. It is an epic journey that will transform her into an honored warrior and earn her the respect of a grateful nation…and a proud father. “Mulan” features a celebrated international cast that includes: Yifei Liu as Mulan; Donnie Yen as Commander Tung; Jason Scott Lee as Böri Khan; Yoson An as Cheng Honghui; with Gong Li as Xianniang and Jet Li as the Emperor. The film is directed by Niki Caro from a screenplay by Rick Jaffa & Amanda Silver and Lauren Hynek & Elizabeth Martin suggested by the narrative poem “The Ballad of Mulan.”

UPDATE: It has been revealed that martial arts veteran Cheng Pei-Pei (Crouching Tiger, Hidden Dragon) has been added to the all-star cast.

Jason Scott Lee (Dragon: The Bruce Lee Story) is also set to reunite with his Crouching Tiger, Hidden Dragon: Sword Of Destiny co-star Donnie Yen as villain Bori Khan, the muscle to Gong Li’s character. Khan is described as “a warrior leader who is intent on avenging his father’s death.”

UPDATE: Rising star Yoson An (The Meg, Mortal Engines) has joined the cast as Chen Honghui, an ally and love interest to Liu Yifei’s Mulan.

Chen Honghui is a confident and ambitious recruit who serves under Commander Tung, played by Donnie Yen. This character should not be confused with the popular Li Shang, the Chinese army captain who was the main love interest in the original Disney animated film. Li Shang will not be featured in the live action version.

Ambudkar will play a con artist named ‘Skatch’ and Yuan will portray the loyal ‘Sergeant Qiang’, second in command of the Imperial Regiment.

UPDATE: MULAN is beginning to put together an all-star cast as martial arts superstar JET LI (Hero) and GONG LI (The Curse Of The Golden Flower) is in final talks to join the previously announced DONNIE YEN and LIU YIFEI.

Li is set to play “the emperor of China, who orders the mobilization of troops via the conscription of one male from each household” while Gong Li will portray the villain, a powerful witch.

‘Mulan’ will mark the third collaboration between Yen and Li after the fan favorite ‘Once Upon A Time In China 2’ and Zhang Yimou’s award winning ‘Hero’.

This will be Yen’s second project with the ‘Disney’ family after starring as the blind warrior ‘Chirrut Imwe’ in 2016’s blockbuster hit ‘Rogue One: A Star Wars Story’.

UPDATE: The release date for MULAN has been pushed back to March 27th, 2020.

Production is set to start in early 2018.

UPDATE: Fans might actually get their wish as MING NA WEN is in talks to make a cameo in the upcoming MULAN featured film!

Wen recently spoke on a panel at the Heroes & Villains fest in Nashville and a question came up regarding her involvement in the film and if she has been asked by the studio. She answered:

“All of the above. I’m hoping. I mean, I’ve spoken to one of the producers on the film, and they’re still in the very early stages of it. So, we’re keeping an eye on it, and hopefully, yeah, It would be lovely too, I think, for the fans as well as for myself, right?”

After the success of ‘Alice In Wonderland’, ‘Maleficent’, ‘Cinderella’, and the soon to be mega-hit ‘Beauty And The Beast’, DISNEY is on the fast track with their next live-action remake, MULAN.

After the recent public backlash regarding Caucasian actors taking on lead roles in Asian themed movies (Ex. The Great Wall, Ghost In The Shell, etc.), producers Chris Bender, Jason Reed and Jake Weiner want fans to know that ‘Mulan’ will be “culturally authentic” with all the main characters remaining Chinese. They even went as far as trying to get an Asian director for the film in ANG LEE (Crouching Tiger, Hidden Dragon), but Lee unfortunately could not commit to the project due to scheduling conflict.

Hollywood actress JAMIE CHUNG (TV’s Gotham) also portrayed ‘Mulan’ in the ‘Once Upon A Time’ TV series from 2012 to 2016.

MING NA WEN (TV’s Agents Of S.H.I.E.L.D.) voiced the original character back in 1998. Hopefully Disney can cast her in the upcoming film as a nod to the fans. Obviously not as ‘Mulan’ (due to her age), but perhaps Mulan’s mother?

Casting is currently underway in Mainland China. Who would you like to cast as ‘Mulan’? Comment below.