After a brief foray into blockbuster filmmaking with The Great Wall (2016), Zhang Yimou finds himself back on more familiar terrain with Shadow (2018), a martial arts infused thriller that is possibly his best film since House of Flying Daggers (2004).

Set during the Three Kingdoms era, the world of Shadow is full of political intrigue. The spoilt King of Pei (Zhang Kai) is disappointed that a city that was once part of his kingdom is now under the rule of general Yang (Hu Jun).

Yang won the city in a duel with the King’s Commander, Ziyu (Deng Chao), which left the commander seriously wounded. Ziyu keeps the severity of his wound a secret from almost everyone, including the King. He does this by replacing himself with a double called Jing (also Chao), who Ziyu has been training for years to cover for him if required.

Living in secret under the city, the only person other than Jing that knows of Ziyu’s secret is his wife, Xiao Ai (Sun Li). Forced to live a lie, it becomes apparent that she has begun to grow feelings for Jing, with her loyalties becoming divided between her husband and his double.

The King is too cowardly to disrupt the peace, not wanting to engage in battle to regain the city. Instead, the King offers his sister’s hand in marriage to general Yang’s son. He sees this as a way of getting some form of control over the city.

He is insulted when they reject his offer, instead offering that his sister could become a concubine. The strong willed Princess Qingping (Guan Xiaotang) is understandably angry at her brother for using her as a bargaining tool.

Unbeknownst to the King, Ziyu has challenged commander Yang to a duel. Due to his injuries, Ziyu is in no fit shape, with the intention of Jing taking his place in the fight. The duel is to detract from the secret invasion of the city that Ziyu has meticulously planned.

Considering Yimou’s back catalogue, it is no surprise that Shadow is one of the most visually sumptuous films of the year. Unlike his previous martial arts epic Hero (2002), which was full of vibrant and rich colours, Shadow opts for a mostly monochrome colour palette.

Working with regular director of photography Zhao Xiaoding, they create a strikingly beautiful epic on par with the majority of the director’s previous work. In certain scenes you could be mistaken for thinking the film has been shot in black in white if it were not for the skin tones of the actors and the blood that sprays across the screen.

Not only focusing on the visuals, Yimou spends as much time on the soundtrack. The sounds of weapons clashing, bamboo scraping across the rain soaked ground and musical instruments are as of much importance to the director as the visuals on display. The musical score from Loudboy (Zai Lao) additionally works well with the on screen action.

As well as directing, Yimou wrote the well-developed screenplay. Along with co-writer Li Wei, they have constructed an intrigue and twist filled tale, where you are never clear on which character you should trust.

In regards to the characters, Deng Chao is terrific in the two leading roles. He is so good that it is possible you will forget that it is the same actor playing a dual role. The frail Ziyu is far removed from that of his double/shadow Jing. Neither character fits into the traditional hero mould. You are never fully clear on what the duplicitous Ziyu is planning, and the seemingly loyal Jing may also have other motives.

Chao has impressed in the past, with roles in the likes of The Mermaid (2016) and most recently in The Liquidator (2017), but personally this is his finest performance to date.

Sun Li is equally as good as Ziyu’s conflicted wife Xiao Ai, who has begun to develop feelings for her husband’s stand in. She is another in a long line of strong female characters throughout Yimou’s filmography, with her training of Jing being imperative in his fight against general Yang.

Sun Li and Deng Chao are actually married in real life, with this not being the first time the two have shared the screen. They can also be seen in such films as Mural (2011) and Devil and Angel (2015), however this is certainly their best collaboration to date.

Guan Xiaotong’s Princess Qingping is another of the films strong female characters. Sister to the king, she is more strong willed than her seemingly weak brother, with her getting a chance to show her courage later in the film.

Zheng Kai as the King is suitably slimy, although even he is not the clear cut villain that he may appear to be. Kai is certainly better utilised here than the last time he worked with Yimou, with his supporting role in The Great Wall.

Hu Jun is always solid, even with the limited screen time he has as general Yang. His duel with Chao is one of the most memorable action scenes during the film.

Shadow is not a full on martial arts movie, with a strong focus on the characters and their political manoeuvring, with it slowly building up to its fight scenes. The audience’s patience is eventually rewarded as when the fights do come they are ingeniously choreographed, being graceful and brutal in equal measure.

The razor edged umbrellas wielded by our heroes are a nice touch and stand out from the usual choice of weapons found in most wuxia tales.

Perhaps not as well-known as his more famous counterparts such as Yuen Woo Ping or Ching Siu Tung, action choreographer Dee Dee creates some tremendous action scenes that should please the majority of martial arts fans.

Dee Dee, alternatively known as Ku Huen-Chiu, has been working in the Hong Kong film industry for decades, working on a number of classic action movies. He has assisted on the likes of Tiger Cage 3 (1991), Iron Monkey (1993) and more recently was action choreographer on Legend of the Naga Pearls (2017).

Shadow is one of his finest achievements to date as a choreographer, and is a great calling card for him. The most exciting action scene is the rain soaked invasion of the city which shows the army’s umbrella training being used to full effect. The feminine movements employed by both male and females when fighting with the umbrellas is one of the most memorable elements of the fight choreography, setting Shadow’s action apart from a crowd of similar seeming martial arts movies.

Martial arts movie fans owe it to themselves to see Shadow. Not as action packed as promoted, they will still be rewarded with one of the most beautifully filmed action movies to grace screens this year. It is great to see Zhang Yimou return in fine form. 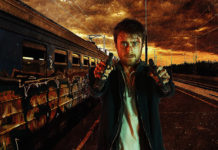 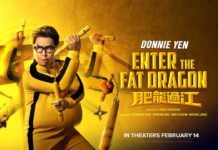